Kaspersky research found that 91% of global healthcare providers have implemented telehealth capabilities. However, this rapid digitalisation has created new security risks, especially when it comes to patient data.

The MQTT protocol is the most common protocol for transmitting data from wearable devices and sensors because it’s easy and convenient. Unfortunately, when using MQTT, authentication is completely optional and rarely includes encryption. This makes MQTT highly susceptible to man in the middle attacks (when attackers can place themselves between “two parties” while they communicate), meaning any data transferred over the Internet could potentially be stolen. When it comes to wearable devices, that information could include highly sensitive medical data, personal information, and even a person’s movements. 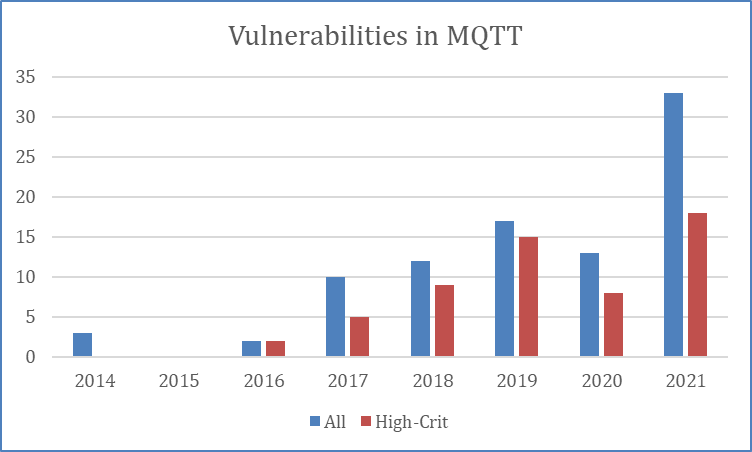 Number of vulnerabilities found in the MQTT protocol, 2014-2021

Kaspersky researchers found vulnerabilities not only in the MQTT protocol but also one of the most popular platforms for wearable devices: the Qualcomm Snapdragon Wearable platform. There have been more than 400 vulnerabilities found since the platform was launched; not all have been patched, including some from 2020.

It’s worth noting that most wearable devices track both your health data and your location and movements. This opens up the possibility of not just stealing data but also potentially stalking.

“The pandemic has led to a sharp growth in the telehealth market, and this doesn’t just involve communicating with your doctor via video software. We’re talking about a whole range of complex, rapidly evolving technologies and products, including specialised applications, wearable devices, implantable sensors, and cloud-based databases. However, many hospitals are still using untested third-party services to store patient data, and vulnerabilities in healthcare wearable devices and sensors remain open. Before implementing such devices, learn as much as you can about their level of security to keep the data of your company and your patients safe,” comments Maria Namestnikova, Head of the Russian Global Research and Analysis Team (GReAT) at Kaspersky. Previous Blockchain could irreversibly shake up the global payments system – for the better
Next PCR FEBRUARY ISSUE OUT NOW! Independent Retailer Special Focus