The future is now: The latest development in AR and VR

From training retail workers and increasing warehouse safety to making gaming more immersive, the advancements in augmented and virtual reality are seeping into many corners of our lives.

Whether it’s for work or pleasure, there’s no doubt that at some point you’ll be interacting with augmented software or even donning a headset. Here, we delve deeper into the various ways this growing sector of technology is improving our lives.

Despite gaming and entertainment being some of the first things people think of when you present them with a VR headset, the immersion that this type of device can offer is ideal for staff training in a variety of sectors.

Multinational retailer Walmart is a great example of how VR has been used to upskill workers. In 2017, the company introduced VR to the retail space by using the tech to upgrade manager training at its 200 Walmart Academies nationwide.

The 2017 training programs were so successful that Walmart is now expanding VR training to nearly 5,000 stores across the US. This means that more than 1 million Walmart associates, across every store in the US, will have access to the same cutting-edge training that Academies have been using over the last year.

“The great thing about VR is its ability to make learning experiential,” said Andy Trainor, Walmart’s senior director of Walmart US Academies. “When you watch a module through the headset, your brain feels like you actually experienced a situation. We’ve also seen that VR training boosts confidence and retention while improving test scores 10 to 15% – even those associates who simply watched others experience the training saw the same retention boosts.”

With more than 17,000 Oculus Go headsets in stores by the end of the year, every associate – including those on the floor who interact with customers the most – will have access to the same training that their managers and department managers do at the Academies. 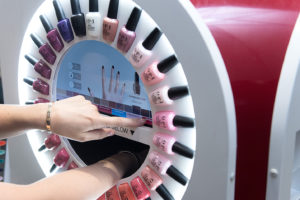 Within the retail space, we are seeing a number of use cases for augmented and virtual reality, both in the stock room and on the shop floor.

Within our interview with Qualcomm’s Brian Vogelsang, you’ll read about its work with Accenture to create virtual stores so that the placement of products, and shoppers’ reactions to them, can be analysed in real time. Qualcomm’s senior director of XR strategy also touched on how smart glasses can help shop assistants stock shelves and pick orders for home deliveries – a service that more and more retailers are trying to offer.

But what about on the shop floor? A good example of how this technology is being used to enhance the experiences consumers have when visiting a physical store is a new collaboration between Play Retail, Pioneer Group and COTY.

Play conceptualised a free standing display unit (FSDU), which would employ VR software, allowing shoppers to try out shades of OPI’s nail lacquer on a digital representation of their own hand in real time. Combining the use of 3D generated content with motion-tracking software and a digital signage display, shoppers can walk up to the device and instantly start interacting.

While picking out nail varnish colours may not sound like it is of complete relevance to tech retail, it does offer up an example of how the shop floor could be shaped by AR and VR tech.

Mark Childerhouse of Pioneer Group explains: “AV technology is now a widespread feature of retail environments and with recent developments in VR, it’s an exciting time for retail spaces. This project with OPI is a prime example of how AV and VR continue to shape the shopping experience and we look forward to seeing what’s in store for these technologies in future.“

As well as providing an experience for shoppers, the FSDU also reports invaluable information to OPI. This transforms the unit into a research tool which can help OPI develop strategies and campaigns, and optimise the merchandising of further units with a view to increase sales across specific regions. Given the average shopper spends just three minutes browsing in duty-free, data insight is crucial for monitoring usage so that OPI’s marketing teams can convert interest into sales.

Aside from providing a more interactive shopping experience and offering up stats on customers’ habits, this kind of installation can also help retailers and brands reduce waste.

Due to such a positive response to the first FSDUs, the rollout of the project now extends to over 400 locations worldwide, reaching over one billion potential shoppers since it began. From August 2017 to August 2018 COTY saw a 24% uplift in OPI sales. Through reducing the need for physical samples, COTY also reduced costs of wasted products, simultaneously removing hygiene risks and improving the customer experience.

THE LOGICAL CHOICE FOR LOGISTICS 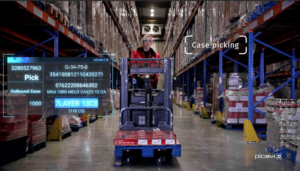 Advanced technology in the warehouse is nothing new, but as smart glasses get lighter and are able to offer up more functionality, we are really starting to see the real impact AR and VR can have on not only the quality of work that can be achieved, but how safety measurements can be properly implemented.

One company making waves in this sector is Picavi (pictured). The brand’s smart glasses can let warehouse workers keep their hands free and have the pick list constantly in view. “This creates the best conditions for continuous material flow and uninterrupted shift operation in the warehouse,” says Picavi.

Picavi also only uses the camera, scan engine and microphone if required. The most important data is saved temporarily and constantly updated via WLAN.

“Wear comfort is key to gaining acceptance among staff,” says the company. “Warehouse work involves a lot of movement, and the smart glasses must not slip, tip to one side or sit heavily on the nose. This is why wear comfort is one of Picavi ́s top priorities.”

Wear comfort is a combination of weight and balance. Picavi checks all smart glasses on the market for these factors, and only includes them in their product range once they have passed this test. Operating the system is also intuitive, clear and simple.

At present, these requirements are only fulfilled by monocular, so-called see-through head-mounted displays (HMD). These project a virtual, see-through display in front of the user’s eye, with the warehouse environment and projection perceived together as ‘assisted reality’. This allows the user to concentrate on their task, while the comfortable smart glasses provide all the important data, such as storage location, item number and number of picks in real time via the display at the edge of their field of vision.

Picavi isn’t the only brand making its mark in this space. Another stand-out product is Microsoft’s HoloLens. The tech giant has recently released the 2nd generation of this smart glass, which features Qualcomm’s Snapdragon 850, a new Holographic Processing Unit and an artificial intelligence co-processor. 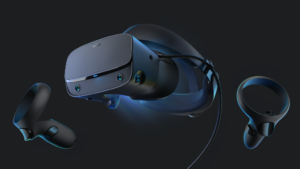 We couldn’t discuss VR and AR without taking a look at the gaming sector – an area which these headsets are perhaps most associated with.

As Facebook’s VR division, Oculus, gears up to release its new Rift S headset (pictured), it seems there is still plenty of demand for these products in the entertainment arena.

The new headset was designed in partnership with Lenovo and features a similar ‘inside-out’ tracking system to the Quest – Oculus’s recently-launched all-in-one, mobile-chipset driven VR headset.

Speaking to PCR sister brand MCV, Jason Rubin, VP of AR/VR partnerships and content at Facebook says he believes a lot of experimentation will happen on the headset.

“We’ll take the best of the experimentation and bring it to Quest because we believe the Quest user wants to go to the store and say ‘everything here is good’.

“Whereas on Rift the users are just in love with VR and they want to try everything. We find that people are more than willing to go into half-finished software and stuff like that. Early Access is not really a console mentality. It’s a PC mentality: ‘I know this thing’s busted but I’m buying it anyway’,” explains Rubin.

A sticking point with some VR headsets in the past has been their price tags. The new Rift S and the Quest both sit at $399. Ruben explains how they got to that figure: “$399 is a price point
that gamers accept – that’s often what consoles come out at, whereas the $699 price point we came out with, when we didn’t know how to optimise for price point, was not an acceptable price point.

“Consumers are used to paying a certain amount for hardware and then they expect a certain amount of software value to offset that price they paid to get the opportunity to play in the ecosystem. $399 is that point at which they say ‘oh yeah okay’ it’s like an Xbox or PlayStation. I think over time we will constantly be trying to bring prices down. But right now this is the right price point for the two headsets.”

Another headset for gamers that’s the talk of the town at the moment is the HTC Vive Pro. For a much bigger price tag of £1,299 you get the VIVE Pro headset, link box, DisplayPort cable, USB 3.0 cable, power adaptors, two controllers and two base stations 2.0.

The headset features precision tracking, promising 360-degree coverage of your movements to the millimetre, along with even distribution of the headset to achieve an “optimal centre
of gravity”.

Other headsets for gamers include the PlayStation VR, Samsung Gear VR, MagicLeap and Google Daydream View – showing there’s plenty of options out there for being entertained in VR.