ASUS has unveiled a host of new products, including NVIDIA G-Sync compatible gaming monitors, new servers, and a Republic of Gamers Strix Scope keyboard (pictured above).

ASUS VG248QG, VG258QR and VG278QR all support gamer-centric features, such as ASUS GamePlus to enhance the in-game experience and GameVisual to provide various pre-set display modes that optimise visuals for different types of games. 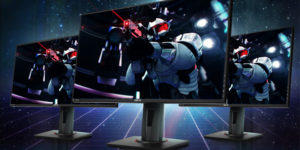 ASUS VG278QR and VG258QR are available now, and VG248QG will be available at the beginning of April.

The Control (Ctrl) key is crucial to success in modern first-person-shooter games. With this in mind the ROG R&D team carefully examined the play style of FPS gamers, applying their findings to create a Ctrl key that’s more than 2X wider than traditional Ctrl keys as well as a shortened left Windows key that’s designed to be less of a target.

For gamers wanting to switch things up a bit, the all-black look of Strix Scope can be punctuated by four silver-coloured caps for the vital WASD key group. Included with Strix Scope, these alternative caps create a striking contrast to the rest of the keys – a standout look that benefits both form and function. A special keycap-puller tool is also bundled for easy removal and customisation of the most-used keys.

Strix Scope’s F12 key has its own unique secondary function, doubling as Stealth. This is a one-touch shortcut that hides all running apps and mute all audio for instant privacy or peace.

All keycaps are designed to take full advantage of the ASUS Aura RGB backlighting that’s built in to Strix Scope, with secondary legends that are carefully placed to also be easily visible. The F5-F12 keys even have front-side illumination, so both media controls and F-key legends are clearly lit. The Quick Toggle Switch allows gamers to flip quickly between these two control modes.

As a select Intel partner, ASUS offers breakthrough performance with the latest Intel Optane DC persistent memory with an over 88% gain in input/output operations per second (IOPS) compared with the same configuration in SSD.

Previous MMD launches new Philips LCD monitor with USB-C dock
Next Is there still value in stocking printers and ink?